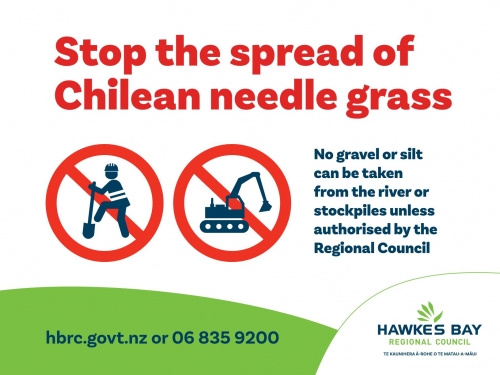 Chilean needle grass is found widely in the Tukituki River and as a pest plant is having widespread negative effects.

Alice McNatty Team Leader – Pest Plants at Hawke’s Bay Regional Council says they are working with landowners and gravel extractors to manage its spread, and are asking river users to keep an eye out.

“River users can have a huge impact on containing Chilean needle grass by making sure they aren’t taking it away with them,” says Ms McNatty.

“It’s important to check clothing, footwear, vehicles, dogs and horses to ensure no seed has attached that could be taken back to your property. It’s especially important around the seeding time, between late October and February, but to control the pest we need to be vigilant year-round.”

“We’ve put signage up reminding the public to keep an eye out for Chilean needle grass at all river access points between the confluence of the Waipawa and Tukituki rivers below Stockade Rd to the Tukituki River mouth.”

“We’re also reminding people not to take any gravel or silt from the river to reduce the risk of spread.”

Chilean needle grass is a Pest Plant in the Hawke’s Bay Regional Council Pest Management Plan and can severely impact farm production and animal welfare. The seed is sharp, and spreads by attaching itself to anything that brushes past the plant. Animals, people, vehicles, machinery and equipment, soil, silt, gravel and contaminated feed can all move Chilean needle grass seed.

Further information on Chilean needle grass which includes a description of the pest and its impacts, and ways you can protect your property can be found on our website.