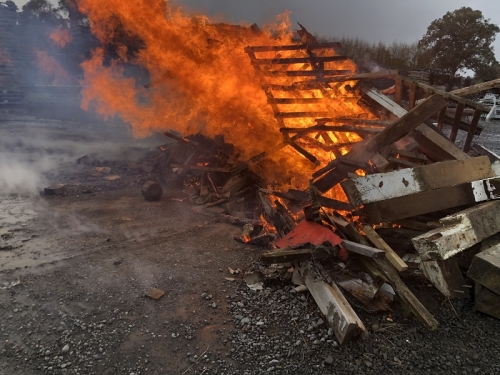 The Hawke’s Bay Regional Council’s tough stance on illegal burning continues, with two more companies pleading guilty in the Hastings District Court and being fined a total of $26,200.

This brings the total number of successful prosecutions for illegal burning so far this year to six.

Downer New Zealand Limited pleaded guilty to two charges of burning a fire containing prohibited materials in its yard in Omahu Road in June last year. It was fined $14,950.  The company has also contributed an additional $7,000 towards marketing the Regional Council’s burning rules.

The property falls within the Hastings Airshed where outdoor fires are banned over the winter period to control air quality.

“Further, the fire permit itself would have had warnings on it that the holder should check with the Council on any requirements it might have for fires. I find that the company was highly careless with regard to the lighting of this fire and the types of materials that were placed on it.”

In the second case, Angela Marie Payne pleaded guilty to burning an illegal fire in a rubbish pit at her property in Waipukurau in August 2019 and was fined $11,250.

The Regional Council’s Pollution Response team was made aware of a fire on the property on 19  August 2019 and again on 23 August, and found the burn pile contained tree branches, an aerosol container, tin cans, metal, a metal chair frame and other items that had burnt.  There were also other prohibited items in the fire pit from the previous visit including Polystyrene, a chest freezer, a microwave oven, metal strapping, oil filled heater and other plastic items.

Burning these prohibited items is associated with nuisance dense smoke and also emissions of hazardous air pollutants known to cause cancer or serious health effects.

Judge Dickey found that that the offending was careless.

“While Ms Payne took some steps to prevent a recurrence of what happened on 19 August 2019, she did not do enough. Everything that was present in the pit from the first fire was still present at the second fire.”

“There is quite simply no excuse for illegal burning. The rules are in place to protect the health of our community and the environment, and the courts agree with us.

“As Judge Dickey stated, the rules around outdoor burning are well publicised. The Regional Council’s website contains information in relation to burning including what you can and cannot burn and when. Visit hbrc.govt.nz and search #burning,” says Mrs Brunton.