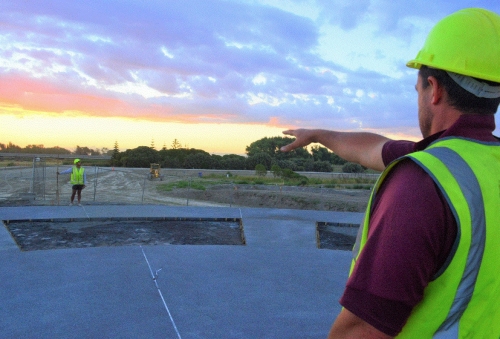 Te Matau a Māui Voyaging Trust is using the summer solstice to mark points of sunrise and sunset on the new compass platform in Waitangi Regional Park.

The summer solstice – the longest day of the year – was approximately midnight on Wednesday this week. Using the marker points, special stones will be set in place and celestial navigator Phillip Smith has been involved with sourcing these from local rivers in Hawke’s Bay.

"The summer solstice points can only be marked at this time of year with the sunset and sunrise visible on the horizon from the star compass. Traditionally this was the time when many ancestral waka would arrive in Aotearoa, so it’s important for students of navigation to learn this knowledge.  We sourced these boulders from our upper Hawkes Bay awa (river), after working closely with local hapū who have mana awa over these taonga (treasures).," says Mr Smith.

Contractors are on track to complete civil works taking place at Waitangi Regional Park in time for Waitangi weekend 2017. The project is being led by Hawke’s Bay Regional Council.

The work under way includes a new access road, a 30-bay car park with two bus parks, and the celestial compass platform. All of these elements will be open to the public by February.

Road access to the Ngaruroro river mouth will be open by 24 December in time for the Christmas period. This doesn’t include the yet-to-be-finished carpark or celestial compass platform. Another short closure of the access road is needed around mid-January, while the road surface is sealed.

POU
The first of the Navigational pou (carved poles) for the celestial compass will be installed on the Equinox in late March 2017. An official opening at Waitangi Regional Park will accompany the first four pou being installed. Thirty more pou will be installed at various times over 2017, staged to coincide with specific rising points of the sun. All Pou are expected to be completed by the summer solstice of December 2017.

WILDLIFE
Wildlife continue to discover the newly-created wetlands at Waitangi. This includes sightings of White Heron or Kotuku, Royal Spoonbill, Pied Stilt, Shoveller ducks, Shags, Dotterill and their chicks, and other waterfowl.

PLANTING, PATHS and SIGNS
A planting plan of around 5,000-7,000 plants is being developed for winter 2017, with an additional 7,000-10,000 plants due in 2018. Pathways will also be a feature of this project and will be installed next year, along with informative signs to tell the stories of culture, history and ecology at Waitangi. New signs will also start to appear early next year.