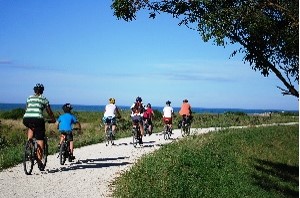 The popularity of Hawke’s Bay Trails is continuing to climb, with new figures showing a record number of people using the trails for cycling, walking or running.

Trail use has increased by 46% in the last three years. Trail counters recorded 22,624 people used the trails in January 2014 compared with 33,107 users in January 2017. The figures also showed a marked boost in those using the Taradale-Puketapu loop ride, and along the Clifton-Te Awanga coastal trail.

HBRC’s Cycle Network Coordinator Vicki Butterworth says it’s great to see some many locals and visitors taking advantage of the 200+ kilometres of trails around the region.

However, she says the recent hot nor’westerly winds continue to dry Hawke’s Bay, with very high fire risk in many areas, including dry grassland along stopbanks and trailside areas of Hawke’s Bay Trails.

She wants to remind trail users the current extreme fire risk and total fire ban in effect, which includes all trail and river areas.

The off-road lime sand trail by farmland north of Hawke’s Bay airport - Turfrey Road to Onehunga Road - is temporarily closed. The concrete coastal pathway from Westshore to Bay View is the recommended alternative.