Better bus ticketing for passengers on the way 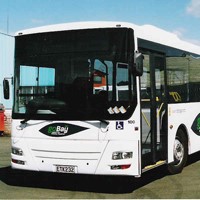 Bus passengers in nine regions will have improved ticketing by June next year.

Otago, Waikato, Hawke’s Bay, Bay of Plenty, Manawatū-Whanganui, Taranaki, Northland, Nelson, and Invercargill councils have been working as a consortium to secure a new ticketing system to replace the ageing technology currently in use.

“Working together to procure a new provider has meant cost savings for our ratepayers, and it will also bring big benefits for our bus passengers,” said Waikato Regional Council's Mike Garrett, spokesperson for the consortium.

The new ticketing system will be rolled out over six months from next January on the public transport networks administered by the councils.

“Passengers will be able to check their balances and top-up the credit on their cards online, and they’ll be able to use their card in the nine regions where this new system is being installed.

“The new system will also produce rich information about how passengers travel on the network, and that means we’ll be able to provide services that better meet their needs,” Mr Garrett said.

As key funder of the new system the NZ Transport Agency has worked closely with the councils throughout the process.

The nine councils which have been working as a consortium to procure an interim ticketing solution are: