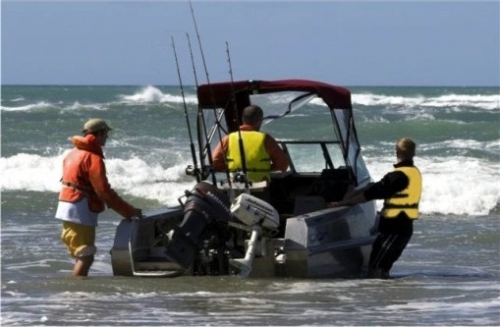 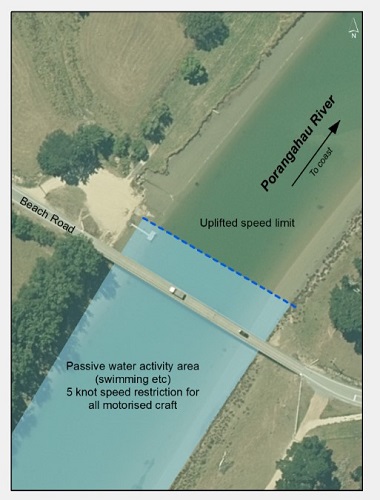 Submissions to the Regional Navigation Safety Bylaw close on 31 October.

There is one change to the rules in Central Hawke’s Bay relating to the speed zones on the Porangahau River.

The Maritime Transport Act requires a 5 knot speed limit on rivers, but Hawke’s Bay Regional Council is able to uplift this with the Navigation Safety Bylaw. The Bylaw draft allows a faster speed zone for water-skiing and jetskiing from a ‘line’ 30 metres downstream of the Porangahau Bridge.

Two black and white striped poles are already in place on both sides of the river 30 metres downstream of the bridge.  These have signs that state ‘Jet Skiers’ with an arrow pointing downstream towards the coast.  Boats and jetskis can be launched from the ramp, and then move downstream for waterskiing or jetskiing activity at speed, away from the passive swimming recreation area and the marae upstream .

“This change to the rule simply formalises the use of the pole markers that are already there, which regular river users will be familiar with.  This gives jet and water skiiers plenty of space for sport downstream, and making it much easier to avoid speeding into the swimming reserved area,” says Harbourmaster Martin Moore.

Harbourmaster Martin Moore has met with Porangahau residents and the marae who are pleased with the change, and the provision for safety.  In previous years, buoys were used to mark the swimming area but these were difficult to maintain permanently, as heavy rains would send down debris turning the attached wires and chains into hazards themselves.  The speed limit for boats upstream of the line between the poles is unchanged from the legal 5 knot speed limit set by the Maritime Transport Act.  A sign on the bridge enforces this speed.

HBRC will also soon be repairing the old wooden wharf to make it safer for people to use in the swimming reserved area.

Anyone concerned about this change or wishing to comment on other parts of the bylaw, can read the draft bylaw and make a submission by 31 October 2017 here.