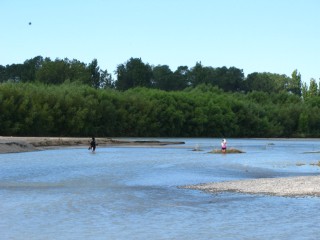 The costs of removing rubbish and burned out vehicles along the Ngaruroro River near Napier and Hastings has resulted in Hawke’s Bay Regional Council limiting access at four locations.

Stock theft and vandalism has been a recurring problem in riverbank areas and for neighbouring properties. The fire risk has also become a concern - local fire crews have attended six fires in the last two months in these areas.

“We need to limit the risks to people and property from the fires and general damage, with increased costs to all ratepayers for clearing people’s filthy rubbish from these locations,” says Martina Groves, HBRC Team Leader Rivers.

People can access the river walking tracks, leaving vehicles in carpark areas. Vehicles should be locked, and valuables should never be left in them. At Chesterhope, the regional council has kept access to a motorbike track from the car park.

“We recognise that most river users enjoy their access to the rivers and respect these spaces, leaving them as they find them. We also appreciate the communities and school children that regularly help out with rubbish clean ups in these areas,” says Martina Groves.

“But a few people are spoiling these areas with rubbish and fires.  It’s expensive to keep dealing with the mess and damage from fires which put people and property at risk.”

Fires are not permitted in river areas at any time, and at present a total fire ban is in force for the Hastings District.  People can also help by taking their rubbish away from any public, shared open space.

Hawke’s Bay Regional Council is reviewing the public access of all riverbank areas. The Ngaruroro River access review is the first to be completed. Other access points are likely to be limited over the next 18 months.  Council and other official vehicles will continue to access the riverbanks as required.