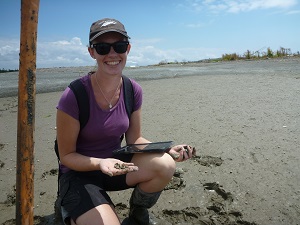 While many of us have been enjoying our summer holidays, a Waikato University student has been busy studying the Ahuriri, Tukituki and Waitangi estuaries to help us better understand them.

Kelly Le Quesne is undertaking a 10-week study of the habitats and ecosystem services of the Ahuriri, Tukituki and Waitangi estuaries. Ecosystem services are those things that environments provide for the benefit of humans such as food, oxygen and clean water. The project is supported by the Hawke’s Bay Regional Council.

The study uses handheld GPS to establish the habitat boundaries and produce digital maps. The organisms present will be determined using visual cues (e.g. tracks, burrows) as well as subsurface observation (e.g. using trowels to dig into the sediment in the quadrats).

The research will allow Council to compare the three estuaries and highlight any connections and similarities, including the types of species that live in them.

Hawke’s Bay Regional Council Coastal Quality Scientist Oliver Wade says the habitats and species of the Ahuriri, Tukituki and Waitangi estuaries have not been extensively studied and little is known about where and what species live there.

“It will enable us to better understand how the estuaries’ ecosystems work, what the role is of the different species that live there, and understand the importance of these estuaries to the residents of Hawke’s Bay” says Mr Wade.