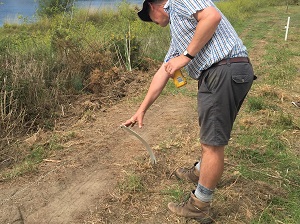 A new flexible fence may be the answer for keeping stock out of rivers that flood.

Hawke’s Bay Regional Council is trialling 1.3 km of a flexible electric stock fence alongside the Tukituki River, near Craggy Range winery (photo below).  The Taragate system has been used successfully alongside rivers and streams in Northland.

The trial fence has been installed in a paddock owned by Mick and Dawn Small.  The paddock is periodically flooded and can be up to 3 metres underwater making it a good test location.

“We don’t want to say we’d like a flood, but a good sized event on the Tukituki will help us to know whether this fence is going to be a solution,” says Brendan Powell, HBRC Senior Land Management Advisor.

The fence is designed to be fitted in sections, and be easier and faster for the farmers to replace after any flood damage.

The fence is a single or double electric wire strung on flexible fibreglass battens and T-posts, secured at regular intervals to wooden fence posts set 50m apart. The fibreglass posts bend in flood water, release debris and are more likely to stay in place in a flood.

The electrical wire is a tin-copper alloy that will break down quickly in the environment and it is coated in biodegradable material. This makes it less of a hazard if it ends up downstream in a flood.  As it ages, the colour fades, alerting the farmer to the need to replace it before it breaks up naturally.

The lengths of wire are connected to the wooden posts by clips that conduct electricity but will disengage when the pressure of water or debris is too much.

“Floods might take out a section of wire in this set up but it disconnects, preventing shorting of power supplies elsewhere on the farm.  And after a flood, the farmer simply replaces the missing sections, faster than fixing a more permanent fence,” says Brendan Powell.

He says the Smalls have had complaints in the past about their cattle getting in the river, but it can take weeks after a flood to reinstate a full post and wire fence to keep stock out of the water.  Because of this ongoing issue, they have kept cattle out of the paddock and it is now a wasteland of wild fennel, a weed cattle are good at keeping under control.

By comparison, the trial fence can be easily reinstated within days rather than weeks.