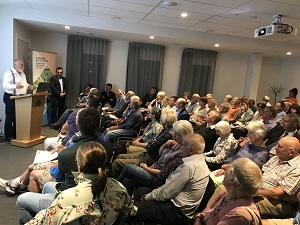 The Council received 569 submissions on the plan and had more than 400 people attend the seven public meetings held throughout the region. Submissions were received via a number of channels including online, email, fax, phone, posted hardcopy and hand delivered. Social media played a role in this year’s consultation, with the Council receiving an additional 45 text messages, 116 Facebook shares, 187 public comments and five private messages.

Of the seven key topics in the Consultation Document the following analysis shows the number of submissions received and the support for council’s preferred option (where clearly stated):

At this week’s hearings the Council will hear from 91 submitters who have indicated they wish to present their submissions in person. It will then spend time considering all the submissions before deciding on any changes to the draft Long Term Plan 2018-2028, which will be adopted at a Council meeting on 27 June 2018.