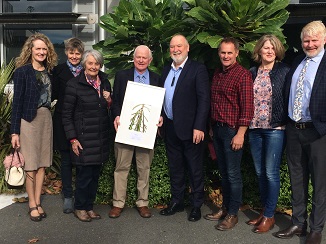 Roger and Diane Alexander have been presented with an Environmental Award by the Chairman of Hawke’s Bay Regional Council, Rex Graham, for their restoration of a wetland at Puketapu, near Napier. Their work over 30 years has transformed a 12 hectare area of dried out swamp into a lake which is now prized by both the family and the local community.

The Alexanders attended a council meeting this week with their family where Chairman Rex Graham presented them with their award featuring an art print of a lancewood tree, by Hawke’s Bay artist, Terri Reddish. 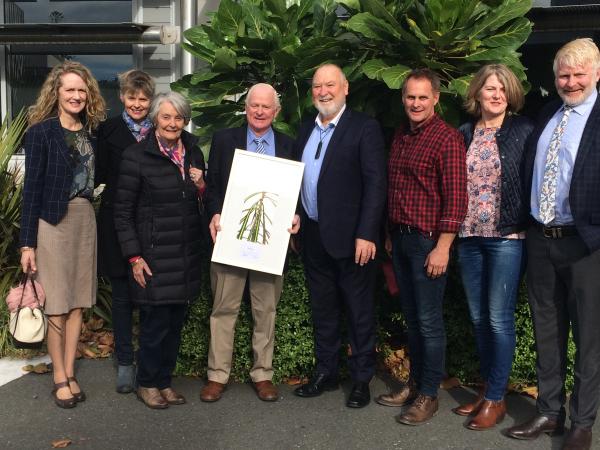 “We first started working on small wetlands on the home farm, and in 1978 bought the property next door with the dried up swamp with big plans to improve it,” Roger told the Council.

“The drought of 1982-83 provided us with the right opportunity to start work on creating a wetland park. The lake and the trees would filter out undesirable material before it got into the Tutaekuri close by.  We moved about 100,000 cubic metres of mud as a start and then started planting.  As time has gone by, it has become an attraction for visitors from overseas and locally.  Locals love the lake and the Puketapu School students use it for nature lessons and canoe polo.”

The lake and established park surroundings are alongside the main road into Puketapu, and are also a major attraction for cyclists on the Hawke’s Bay trail which runs alongside.  The whole area is now used by the Taradale Rotary for their country fair and auction each year.

“The lake and park surroundings has clearly been a family enterprise, and will be an ensuring asset for the region,” said Chairman Rex Graham.

Mike Mohi, Chairman of the Māori Committee said, “The lake is well-recognised for its contribution to the restoration of the environment.”

PHOTO:  Diane and Roger Alexander (3rd and 4th from left) with their family and Chairman Rex Graham (centre).