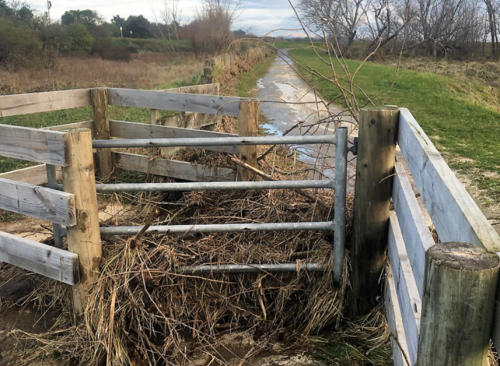 Hawke’s Bay Regional Council urges cyclists to avoid parts of the cycle trails for a few weeks and generally take care on the surface which has taken a battering in many places.

Cycle Trail Coordinator Vicki Butterworth has been out surveying the damage. She returned feeling the weight of a new workload that contractors and council staff will tackle over the coming weeks.

“It’s pretty sad out there at the moment, especially the Puketapu loop, a very wet ‘water ride’ around Ahuriri and past the airport, with complete washouts by Waitangi Regional Park,” says Vicki.

Many parts of Hawke’s Bay Trails beside the region’s swollen rivers were flooded, scoured out or blocked as a result of the 1-in-15 year river levels experienced around Napier and Hastings earlier this week. The main river routes affected are by Ngaruroro and Tūtaekurī rivers. Trail surfaces across the network were also damaged where trickles became streams and either washed away the compacted limesand or even the gravel base beneath.

“The key thing is just to take care and if it looks bad, don’t ride it,” says Vicki.

“E-bike riders will want to avoid the Ahuriri estuary until it dries out a bit more. It’s difficult for us to close the trails, but many of them are not an easy ride just now. There’s a lot of river silt, it’s rough, slippery and eroded in places,” adds Vicki.

The Regional Council will have staff and contractors out clearing the paths and working through a priority programme of reinstatement, depending on the weather.

Cyclists who do use the trails are asked to report any particularly badly affected areas to Vicki. Photos and a specific location are extremely helpful. Email vicki.butterworth@hbrc.govt.nz or contact us at hbtrails.nz.

Hawke’s Bay Trails is one of 22 ‘great ride’s in the New Zealand Cycle Trail. The Regional Council will apply to the Government’s Maintaining the Quality of Great Rides fund to help fund the unbudgeted cost of fixing the trails as quickly as possible.

Image caption: (a selection of images shows the damage to Hawke’s Bay Trails)