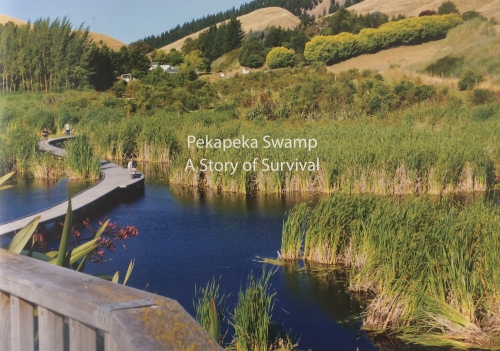 A new book “Pekapeka Swamp: A Story of Survival” has been published to tell the story of restoring the swamp and creating the regional park south of Hastings that people enjoy visiting today.

The book has been written by Garth Eyles, former manager of land management at Hawke’s Bay Regional Council, and published by the regional council.  Garth Eyles has gathered information from council records, photos and maps, and knowledge from local landowners, and groups involved in the park enhancement work.

“I enjoyed the opportunity to write this book and put together what we learned from this complex project into a useful reference source,” says Garth Eyles.

“The book captures a broad amount of information about restoration of the wetland, and how a real community and collaborative effort has turned Pekapeka around into a healthy, attractive, educational and inspirational place,” says Steve Cave, HBRC Open Spaces Manager.

The book was launched today informally with a small group of Regional Councillors and some of the people who have helped enhance the swamp and create the regional park.    They included Waa Harris, kaitiaki for Pekapeka wetland; Peter Dunkerley, who helped with fundraising and early development work; Hans Rook who was working on willow control as early as the 1980s in his Wildlife Service role; and Regional Councillors Debbie Hewitt and Paul Bailey.

Pekapeka is the remains of an extensive wetland system that was progressively drained and filled in to create more pasture.  There were attempts to improve the swamp but, by the 1990s, it was suffering from stagnant water, and willow and weed invasion. In 1995 Hawke’s Bay Regional Council committed to protect and enhance the few remaining wetlands of national and regional interest in the region; Pekapeka was on the list of 10 priority wetlands developed in consultation with the Department of Conservation.

A plan to improve the swamp was developed, and in 1999 a community interest group was set up which included local landowners, representatives from local marae, DOC, Forest and Bird and Fish and Game.   Work was started to clear the willow overgrowth that was hindering the water flow within the swamp.  A weir was installed to keep a consistent water level and help the habitat to thrive.

The visitor area that is enjoyed today by hundreds of visitors a year was developed from 2009 thanks to fundraising efforts by Friends of Pekapeka with the regional council.  The carpark, pathways, boardwalks were created and around 16,000 native plants were added, and storyboard signs were installed to tell the story of Pekapeka.  Further work since has included a CanTeen NZ picnic/reflection area, pest management by the Pekapeka shooters, and more planting by the community, Hastings-Havelock North Forest and Bird and some local schools.  Many schools visit the regional park for wetland ecology and environmental studies.

Pekapeka swamp will feature at the national Wetland Symposium which will be held for the first time in Hawke’s Bay on 26-28 September; Garth Eyles will be speaking at the event about the enhancement of the swamp, and the field trip will include a visit to the regional park.

“Pekapeka Swamp: A Story of Survival" can be purchased from Hawke’s Bay Regional Council’s Napier office for $20 incl GST.