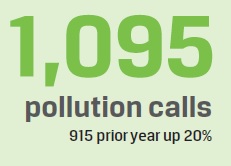 Hawke’s Bay Regional Council received 20% more calls to its Pollution Hotline over the past year, highlighting the community’s growing dissatisfaction with people who disrespect the environment.

The 92 infringement notices issued in 2017-18 were a 67% increase on the previous year. 46 abatement notices were issued. The number of prosecutions remained the same at five.

“It’s great to see honest commentary in the report, with continuing focus on the compliance operations of our councils, sectors and industry. Standards must be met and the performance of our local authorities should lead the way,” says Cr Neil Kirton.

“I congratulate the dairy industry on the growing number of gold, silver and bronze certificates identified in our annual Dairy Excellence Awards, across the 79 dairy farm operations in Hawkes’ Bay,” says Cr Paul Bailey.

A public-friendly Compliance Monitoring and Incident Reporting - summary report, containing a snapshot of annual activity, is also on the Regional Council's website.