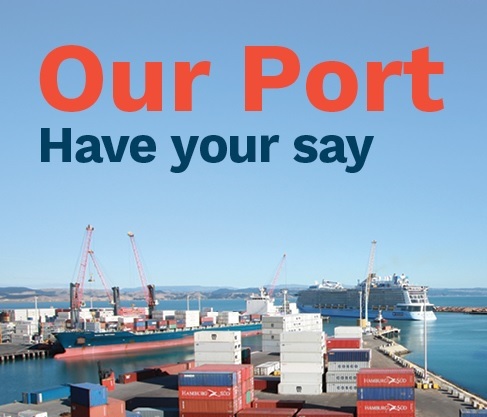 Submissions have now closed on the public consultation on how to fund the growth of Napier Port with thousands of submissions received by the Hawke’s Bay Regional Council.

The Regional Council has been consulting on four potential options to fund the Port’s growth and by 5.30pm yesterday, following submissions closing, it had received almost 3,500 submissions.

Just over 28% of submissions support retaining 100% ownership and control of the Port and funding the growth through borrowing, paid for through rate increases. Just under 10% supported none of the options and the remaining submissions were split between the options of selling up to 49% of the Port to a minority investment partner or leasing the Port out for up to 50 years.

Regional Council Chair Rex Graham says there has been a high level of public engagement in the process, which set the Council up well to further consider the issue.

“We’re really pleased with the public engagement in this process. We’ve received nearly 3,500 submissions from across Hawke’s Bay – seven times more than we received during consultation on the Regional Council’s last long-term plan,” says Mr Graham.

“Regardless of the preferred option or perspective expressed, submissions have been thoughtful and considered and the Council will be very well informed when it comes time to make decisions on this important issue for Hawke’s Bay.”

All the submissions will be available on the Regional Council website on 28 November 2018. Hearings will be held on 4 and 5 December, with approximately 88 submitters requesting the opportunity to speak to their submission.

“The council has conducted an extensive consultative process and all the information has been available for nearly seven weeks. We held six public meetings, had a presence at the Hawke’s Bay and CHB A&P shows and run hundreds of print and radio ads since 3 October. We’ve also held media briefings, published opinion editorials in the local newspaper and published multiple social media posts all designed to encourage participation.”

Mr Graham says once the hearings are completed the Regional Council will consider all the feedback with the intention of deciding on a course of action before the end of the year.

“This is an important decision for the future of Hawke’s Bay. Our Port underpins the operation of our economy and we simply must find a solution that enables it to grow, and in a timely way, in order to continue to support our region.

“On behalf of all councillors, I want to thank every submitter for having their say on this issue. This will be really important in enabling the Regional Council to make decisions on this matter.”