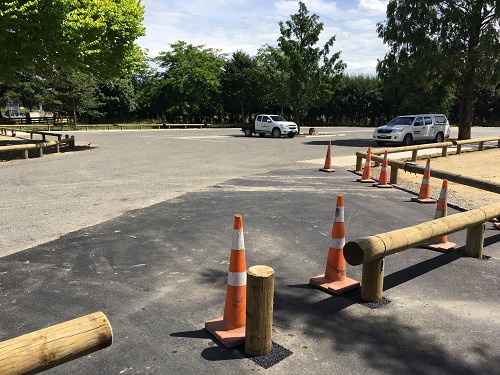 The carpark was moved to Farndon Rd in May this year while work was underway on the Pākōwhai roundabout for the Whakatu Arterial Link (WAL) road.

The route was opened to traffic on Wednesday this week and now the newly expanded carpark will be able to be restored at its original location as of tomorrow.

The carpark comes under Hastings District Council’s jurisdiction and will be re-opened with more parking spaces – up to 55 from 36 previously.  Access is from the roundabout, which will make it much safer for vehicles entering and exiting the park.

The park is owned by Hawke’s Bay Regional Council (HBRC) and their staff have helped with the planning of the improved entrance.

“It has been great working with WAL and District Council staff on this opportunity to improve access and capacity as Pākōwhai Regional Park is important for many people as a centrally located green space,” says HBRC open spaces team leader Antony Rewcastle.

While it has been an inconvenience for some park users, the WAL work has been an opportunity for Hawke’s Bay Regional Council to improve access to the park.

There is new footpath access to the Old Ngaruroro Bridge, improved connection to the HB Trails, and a section of the old stopbank has been removed.

Further work in the new year will include upgraded signage, other facilities within the park, better connections to the Ngaruroro River and predator control.

The park is popular as a place where dogs are allowed off the lead.

Now that the car park is bigger and busier, however, it’s recommended that dogs be kept on a leash in the car park area, says Hastings District Council community safety manager John Payne.

“We ask owners to keep their dogs under control at all times and to be aware and courteous of other people and their dogs.”

People cleaning up after their dogs is also appreciated - new signs in the car park and park entrance remind people of these safety aspects.

The Hastings District Council is delighted to be able to re-open this area for the convenience of users, and thank the community for its patience while the roading and carpark project was completed.