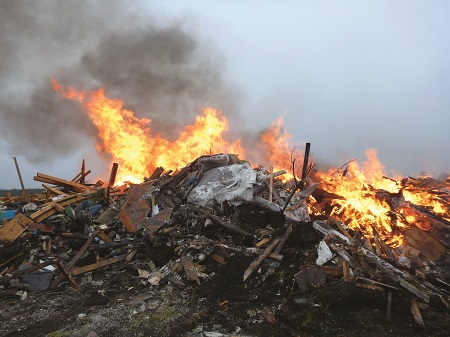 The Hawke’s Bay Regional Council is hoping the conviction of a Hawke’s property developer for illegally lighting fires containing prohibited materials will make others think twice before burning piles of rubbish.

In the Napier District Court this morning, David Leslie Colville admitted one charge of discharging contaminants, namely smoke and its constituents from a rubbish fire containing prohibited materials to air in a manner that contravened Rule 75 of the Hawke’s Bay Regional Coastal Plan, when such a discharge was not permitted by a national environmental standard or other regulation or a rule in a Regional Plan (or proposed plan) or by a resource consent. He was fined $11,750 plus solicitor’s fees

The charge relates to two separate fires at Tangoio last year. Colville, through his property development company, was involved in the demolition of three beach houses on Beach Road at Tangoio. He gathered the debris from the demolished houses and burned it in two separate fires. The piles of debris contained asbestos, treated timber, plastic, metal, chipboard and painted timber. The discharge of smoke from the fires contained contaminants. No resource consent was held for the fires.

Regional Council Team Leader Pollution Response, Mike Alebardi says flouting regional rules and lighting these type of fires will not be tolerated in Hawke’s Bay and anyone caught will be prosecuted.