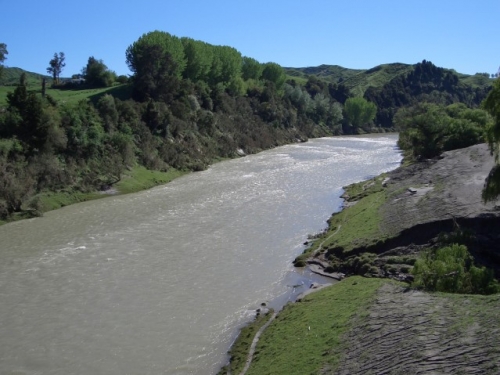 A “sizeable chunk” of funding will go to a project to combat hill country erosion in the Hangaroa – Mangapoike area, at the headwaters of the Wairoa awa, says Hawke’s Bay Regional Council’s Wairoa based catchment manager Nathan Heath.

Government funding of $5.5 million has been approved to tackle erosion issues across the Hawke’s Bay region, where the Regional Council is taking a ‘whole of catchment’ approach to land and water quality issues.  Sediment has a major effect on water quality in the Wairoa awa, as well as other rivers in the region.

“A sizeable chunk of the funding Hawke’s Bay Regional Council receives from the Ministry for Primary Industries’ Hill Country Erosion Fund will be used for the Wairoa River, and we have the Wairoa community to thank for raising their concerns,” says Nathan Heath.

“Local iwi pointed out to us at a community meeting that one of the big challenges to addressing erosion and sediment entering in the Wairoa awa was coming from the catchment areas surrounding the headwaters over the border in Gisborne.”

“We heard them, so asked ourselves ‘What can we do about it’ and that lead to a successful application to MPI’s Hill Country Erosion Fund.”

The Hangaroa and Mangapoike catchments cover around 100,000 hectares in the Gisborne District. Hawke’s Bay Regional Council will use this funding for a new employee yet to be appointed, who will be based at Gisborne District Council to work with farmers exclusively in these areas, and assist them with farm planning and provide funding for projects, including tree planting.

The Hill Country Erosion Fund has nearly $36 million to support erosion control programmes across New Zealand between 2019 and 2023.  Twelve councils were approved for funding, four of which had not previously received HCEF support.

Hawke’s Bay Regional Council staff will be at the East Coast Farming Expo in Wairoa on 6-7 March and available to discuss the erosion funding and programme with interested farmers.