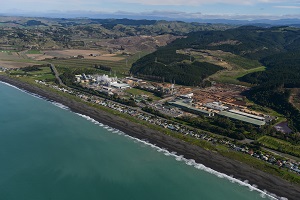 Hawke’s Bay Regional Council has completed an extensive investigation into the leak of Pan Pac Forest Products’ wastewater outfall pipe and concluded no charges will be laid against the company in relation to the matter.

A leak was discovered in the 2.4 kilometre outfall in September last year. Pan Pac Forest Products has unsuccessfully tried two different methods to repair the leak and is now working on a third approach.

The Regional Council has undertaken an extensive investigation, which reviewed the consents for the outfall pipe and Pan Pac’s compliance of those, the historical maintenance of the pipe, and the company’s response to the leak, including its communication with the Regional Council and local residents.

Hawke’s Bay Regional Council Chief Executive James Palmer says while the Regional Council, like everyone else, is disappointed with the amount of time it is taking to repair the leak and the impact it is having in the local area, it did not believe the facts of the case warrant prosecution.

He says the investigation found Pan Pac has consistently and regularly monitored the condition of the pipe, and since 2001 has had it inspected by a dive team 75 times, quickly repairing any signs of wear. No evidence of negligence by Pan Pac in their maintenance or operation of the pipe was identified and the breakage could not have been reasonably foreseen.

“We acknowledge that the buried portion of the pipe has not been able to be inspected to date, but new technology means this is now possible and the Regional Council will be expecting Pan Pac to use that technology in the future to undertake regular inspections. This involves a robotic camera and sensors.”

He says in making a decision around whether to take enforcement action against Pan Pac over the outfall pipe leak the Regional Council closely considered its own Enforcement Policy, alongside the Solicitor-General’s guidelines to prosecution.

“There are several factors that lead to our decision not to prosecute Pan Pac. These include its consistent outfall pipe maintenance regime, the proactive way it is approaching repairing the pipe, including its effective communication with the regional council and local residents, and its willingness to plan for a replacement pipe in the future.”

Mr Palmer says in making its decision, the Regional Council also considered the fact that while it was not happy the pipe was leaking by the shore, the discharge comes from wood waste and undergoes extensive treatment prior to discharge resulting in only minor effects on the surrounding environment. Pan Pac has a consent for the discharge to the environment, however the leak means it is not being discharged further out to sea where dilution and mixing normally occurs.

An exact timeline for the repair cannot be confirmed as weather and sea conditions play a pivotal role in the process.

An onshore access hatch has been installed on the pipe and access offshore as well. These access points allow for the cleaning equipment, fibreglass patches and the liner to be pulled through the pipe from one point to the other.
The repair process is as follows:
1. The pipe will be cleaned internally
2. Fibreglass patches will be positioned inside the pipe and moulded to damaged areas
3. The specialised liner imported from Switzerland will be fed into the pipe using the onshore access hatch and the offshore access point
4. The temporary access points will be sealed

Mr Palmer says once repaired the Regional Council will continue to monitor the situation and is keen to see Pan Pac bring back its plans to replace the pipe in the near future.”