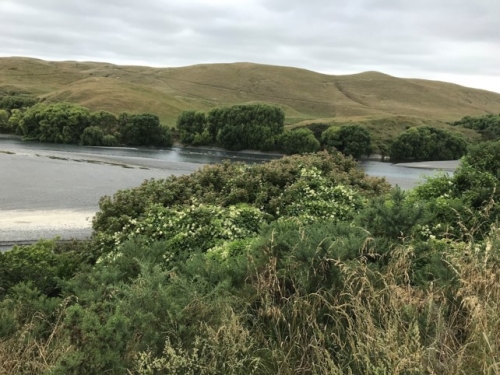 A study by a University of Waikato environmental science student has helped build Hawke’s Bay Regional Council’s knowledge of the forest remnants alongside the Ngaruroro River. (Photo: Titoki surrounded by Old man's beard (clematis), gorse and non-native grasses by the Ngaruroro)

Moari West is originally from Ongaonga and she gained a summer research scholarship from the University of Waikato to work with Hawke’s Bay Regional Council.

“The scholarship has allowed me to experience doing a research project with real-life impact,” she says.  She is now determined to continue with a Master of Science degree.

Over summer, she completed a survey of seven remnant forest sites along the lower Ngaruroro River.  These sites were identified in the regional council’s 2011 Ecological Management and Enhancement Plan.

“It has been invaluable to have a researcher available to the Regional Council to increase our knowledge and help us prioritise the enhancement of these sites,” says HBRC’s Terrestrial Ecologist Keiko Hashiba.

The study was a mixture of field work and desk top modelling to identify the plant species present and determine what could be done to protect and enhance each site.

The forested sites vary in their mixture and range of plants, which include titoki, mahoe, ti (cabage tree), ngaio, kōwhai, kiokio and karaka.  In earlier periods, these remnant areas would have been full of kahikatea, totara and matai forests, but there is hardly any of these late-successional species left in the lowland of the region.

However Ms West’s research has shown that some of these sites contain elements of ecosystems that have become rare in Hawke’s Bay, such as titoki trees in one site.

“A totara- titoki forest was once the dominant ecosystem in the lowland of Hawke’s Bay, but today we have only five percent left of its original extent.  By finding titoki hanging in there in the landscape means that site has potential for being restored to closer to the state of the original forest,” says Ms Hashiba.

Some of the threats to these areas are Old man’s beard, blackberry, bindweed, willow, gorse, and exotic grasses.

Ms West scored the forests in terms of forest edge, canopy, management and threats to enable decisions to be made by the regional council on where restoration will have the most benefit.

One of the main threats Ms West identified is that these sites are isolated from seed sources which, coupled with competition from pest plants and grasses, means there’s not enough healthy new growth coming through to succeed older trees.

“Now that we know what plants are present, there’s plenty more research needed to determine how to best protect these sites,” Moari West says, who says she hopes to make this the topic of the research component of her degree.

The University of Waikato’s Summer Research Scholarship programme enables undergraduate students, or those just finishing undergraduate study, to experience doing a research project. This helps them decide whether research-based postgraduate study is the right next step for them. As part of its presence in Hawke’s Bay, the university co-funds a range of scholarship projects each summer in collaboration with local organisations such as councils and the Cape to City project. These are advertised on the University’s Hawke’s Bay website in July-August, with projects starting in Late November.