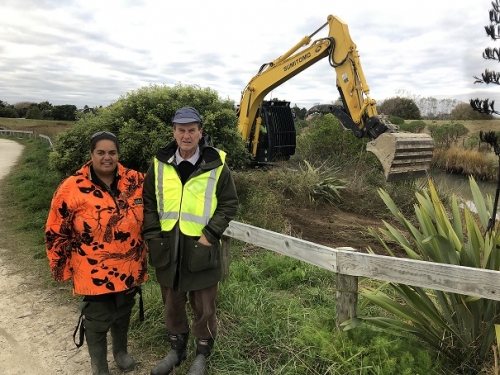 Work at the Tukituki River estuary near Haumoana will improve the biodiversity of this area, making it more suitable for whitebait spawning.

The area where Tukituki River meets the ocean has been identified as a priority ecosystem site through the Hawke’s Bay Biodiversity Action Plan.  The same space sits below a popular cycling and walking trail, with another priority ecosystem nearby at the river mouth gravel bank, which is home to many sea birds.

Hawke’s Bay Regional Council's Works Group has removed invasive silver poplars and weeds, leaving behind native plants and flood protection willows on both sides of the river, between Black Bridge (Mill Road) and the Tukituki River mouth estuary.  Willows remain on both sides of the river, for flood protection, and these will be reinforced with new willow pole plantings this winter, and native trees next year.

Inanga (a whitebait fish species) already favour the area. These changes will create more space and better conditions for spawning.   The Regional Council will reshape one bank to create a shoulder above the high tide level for spawning.  Ngaio trees will be trimmed to give more light at ground level and to promote dense grass growth, which makes the best spawning habitat for these fish.

Experienced ecological advisor Hans Rook, and hapū members are monitoring the spawning alongside Regional Council staff.  Hawke’s Bay has a good track record for managing whitebait habitat. Spawning habitats have been identified, protected and enhanced since the 1980s.

“Manicuring the vegetation here will give us the best production of whitebait eggs at this magnificent taonga site.  Nobody else around the country can match what has been achieved with this whitebait mahi here in Hawke’s Bay,” says Hans Rook.

The Regional Council are investigating design solutions to address bank erosion near the foot/ cycle bridge at the Haumoana wetland.