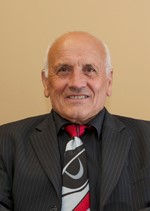 Tributes were paid to Mike Mohi during this week’s meeting and full turn-out at Pukemokimoki Marae.

Mr Mohi is stepping down from this role while continuing his focus with Ngā Whenua Rahui and other work. He leaves this role highly-regarded by his Regional Council peers, other kaumatua, the many organisations and individuals that he has worked alongside.

Regional Council Chief Executive James Palmer expressed his gratitude for the commitment Mike Mohi has shown to the region, to strengthen the voice of tāngata whenua both at a governance level, at a project level and across the organisation.

“Mike Mohi has led the development of our cultural competency, chairing the Māori Committee since 2011, over a 18-year term. He has often been a practical sounding board for our Councillors and senior staff, and has contributed directly to the culture of our organisation, our understanding of the Treaty of Waitangi, our use of te reo, and our commitments to tāngata whenua across the region,” says Mr Palmer.

Māori Partnerships Group Manager Pieri Munro acknowledges Mike Mohi for his contribution to the Regional Council’s work programmes and the strong relationships formed during his tenure.

“Mike Mohi has maintained a warm and humorous kōrero with our regional community for many years now. He has represented and reflected tāngata whenua views, often brokering complex and difficult situations,” says Mr Munro.

The Māori Committee does not meet again this year. Following the local government elections on 12 October, the elected group of Regional Councillors will confirm a new Māori Committee membership.

The Māori Committee includes elected councillors and 12 representatives of the four Ngāti Kahungunu Taiwhenua / Executive in this region. The committee makes recommendations to Council on matters of relevance affecting Māori people of the region and helps fulfil the Māori consultative undertaking of Council, particularly with regard to the principles of the Treaty of Waitangi - Te Tiriti O Waitangi.