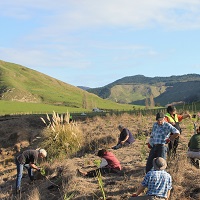 The Whangawehi Catchment Management Group almost took out an international river prize at an event held in Brisbane on 22 October.

The Whangawehi group was nominated as a finalist for the 2019 Thiess International Riverprize Awards ceremony held in Brisbane, Australia.

Feedback from the judging panel indicated that the Whangawehi model was something unique and to be considered as an example worldwide. However, the group was formed too recently to base its achievements on decades of monitoring data.

“This nomination confirms that the group is operating at an International level and that’s a great encouragement for all our Whangawehi community,” says Whangawehi project manager Nic Caviale-Delzescaux.

“We were rubbing shoulders with inspiring initiatives that show how integrated river basin management can restore and protect rivers, wetlands, lakes and estuaries,” adds Nic.

The Whangawehi group was competing against two large-scale river restoration projects based in America, the Chicago River Restoration project and the James River Initiative.
The James river project was awarded the 2019 International River Awards acknowledging 40 years of active work and well-documented outcomes.

The International Riverprize is the world’s foremost award in river basin management. It recognises and rewards organisations making waves in the sustainable management of the world’s rivers, whether at the grassroots or transboundary level.

Previous winners and finalists have received widespread recognition, built new partnerships, shared their knowledge and won other awards following Riverprize, becoming part of a network of river practitioners and experts from around the world.