Give black-billed gulls a wide berth 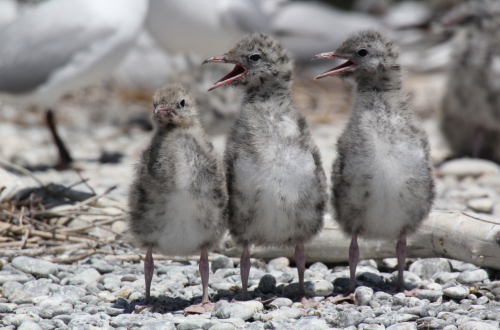 Napierites have a lovely unexpected gift for the end of spring in the form of a nesting black-billed gull colony.

The colony of gulls, the world’s most threatened species of gull, has popped up on Pandora spit in the estuary.

“It’s awesome to see the rarest gull in the world setting up a home in our backyard, our Ahuriri estuary. There are over 200 birds in the colony, but despite this large number they are sitting ducks,” says Keiko.

“They’re really vulnerable because when the parents get food or when they’re threatened they fly up and leave the eggs and chicks exposed to the cold, hot, and other threats. Because of this it’s important to keep a respectful and very safe distance.”

Department of Conservation (DoC) Senior Ranger Community, Chris Wootton says black-billed gulls now have a threat status of Nationally Critical, which is worse than the kiwi and same as the kākāpō.

“Key threats to these gulls include introduced predators and human disturbance. People can help black-billed gulls to survive by leaving nesting colonies alone during the breeding season - between September and January - and keeping dogs on leads. Dogs can kill chicks and destroy nests so we’re urging dog owners to stay away from the area,” says Chris.

Disturbing protected birds and destroying nests are offences under the Wildlife Act and can result in imprisonment of up to six months or a fine of $100,000.

“The estuary is a wildlife refuge, so is a really special place for species like these gulls. We’re asking the community to be respectful of the birds as they raise their families and keep clear,” he says.