Regional Council taking to the sky to understand our water better 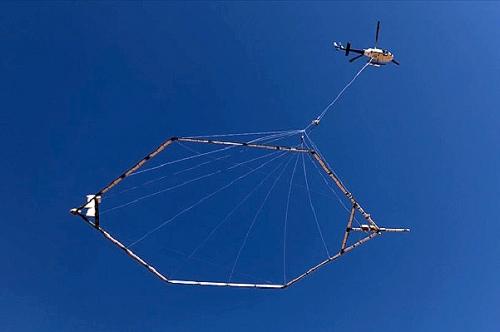 It’s the first time any Council in the country has used the latest airborne electromagnetic survey technology called SkyTEM.

Science Manager Dr Jeff Smith says the region’s aquifers are in effect having a scan to see what they look like inside, and greatly improve understanding of how they are working so they can be kept healthy for the future.

“The Regional Council, in partnership with the Provincial Growth Fund (PGF) and GNS Science, is spending money on tried and true, cutting edge Danish SkyTEM technology that has been used extensively overseas,” he says.

Dr Smith is giving the community a heads up that people may see a low-flying helicopter towing a large hoop hanging from a cable from around 20 January 2020 until the beginning of March. It will fly over the Heretaunga Plains, Ruataniwha Plains and Otane and Poukawa Basins and 'scan' them. The helicopter won’t be flying over built up urban areas like Napier, Hastings and Havelock.

Dr Smith says the SkyTEM technology will give a 3D view up to 300 metres deep underground where no-one has ever seen before, to truly understand how the aquifer systems work.

“Water management is crucially important for the future of our region. The more we know about our aquifers and how they are working, the better our decision making can be.

“The information from the 3D aquifer mapping survey has significant value for the community in understanding the region’s water resource. The results will be freely shared and available to tangata whenua, other councils and community groups,” he says.

The 3D aquifer mapping project is one of four freshwater projects announced during the Provincial Growth Fund (PGF) allocations to Hawke’s Bay in June. The others are a whole-of-region freshwater assessment, and pre-feasibility investigations on a Heretaunga Flow Enhancement /Water Storage Initiative and a Tukituki Water Security Initiative.

GNS Science is working closely with the Regional Council on the project. It says that internationally, similar initiatives have resulted in significant advances in the mapping, modelling and management of groundwater systems. There is more information on the Regional Council’s website, check out www.hbrc.govt.nz, and search #3Dwater. During the flying period there will be regular updates on the website, facebook page and local radio stations.

Find out more about the project here