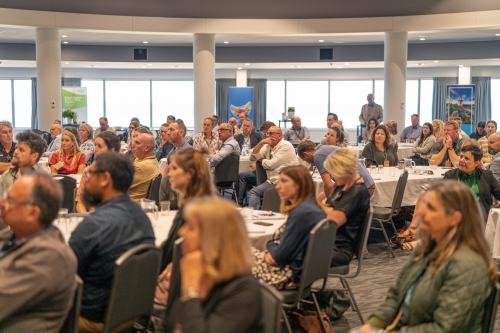 An ambitious initiative to galvanise collaboration between Hawke’s Bay businesses and councils on climate change kicked off in Napier yesterday.

The Climate Action HB: Business CoLab event on 25 November saw over 100 people from the region’s businesses and councils come together to begin plotting a way forward for Hawke’s Bay to transition to a low-emissions economy.

Speakers included Regional Council Chief Executive James Palmer, Dr Daniel Hikuroa of Auckland University, Santiago De Marco and Mark Boyle of Hohepa Homes, and Lee Stewart of Ndever Environmental. They outlined the impacts already being felt in the region as a result of accelerated climate change, what was still to come, and how businesses and council need to collectively take action.

Regional Council Chief Executive James Palmer says the event was a great start to conversations about the region’s response to climate change. “We know we can only respond to climate change when we do it together as a Hawke’s Bay community, and I’m excited by all the interest we had at the event.”

The overall message was one of mitigation and adaptation, with businesses encouraged to factor climate change into decision making, and to measure their carbon impacts to make meaningful reductions.

The Regional Council announced a climate emergency in June and this event was part of the organisational work under action to address climate change. It is developing a comprehensive work programme and community engagement plan for a regional response to climate change.

The predicted impacts of climate change on Hawke’s Bay include a rise in temperatures, fewer frosts, more frequent and more severe droughts with a greater fire risk, drier winters and springs, and sea level rise resulting in coastal erosion.

“All of these impacts have obvious consequences for everyone in the Bay – from residents living next to the sea to orchards in the plains and farms in the hill country,” says 3R Group Chief Executive Adele Rose.

3R Group is a member of the Climate Leaders' Coalition, launched in July last year to promote business leadership and collective action on the issue of accelerated climate change.

The event is set to be followed by a series of targeted workshops aimed at enabling businesses to act on climate change, Adele says. “This event was a call to action, not a one-off event, and is just the start of an ongoing partnerships that will bring meaningful change.”

Find out more about the event visit 3R.co.nz.