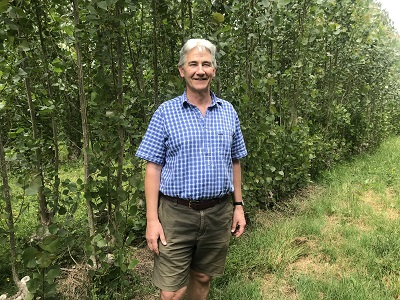 The focus of World Soil Day Te Ao rā oneone is erosion, and it’s a very topical issue for Hawke’s Bay with more than a fifth of the land in region at risk.

Erosion causes valuable soil to be lost and it can cause damage to farm tracks and fences. When soil enters waterways it decreases water quality.

Mr Powell says it can take up to 1000 years to generate two to three centimetres of soil, so it’s really important to hold on to what we have.

“We want farming to have a positive future. Protecting soil is necessary for farming and food systems that can sustain us into the future. Holding onto soil also enhances water quality.”

The Regional Council is working with farmers and landowners to advise and assist on effective methods to manage soil erosion, including the Erosion Control Scheme and supplying riparian plants at cost, and willows and poplars at heavily reduced prices.

“Our mission statement is enhancing our environment together' The word “together” is important to us. We can’t achieve improvements on our own. We need to work together with landowners and others for the improvements that will benefit us all,” he says.

Mr Powell says there is increasing pressure on soils. The United Nations Food and Agriculture Organisation estimates global rates of soil erosion have increased substantially in the last 100 years

“95% of our food is directly or indirectly produced on our soils. With a growing world population, global agricultural production must increase by 60% by 2050 to meet food demand alone. At current rates of per hectare production the planet would need 6 million hectares of new land per year to meet demand,” he says.

“Instead 12 million hectares per year is lost through soil degradation and 33% of land globally is moderately to highly degraded.”

Photo caption: Regional Council Catchment Manager Brendan Powell at the soil conservation nursery near Taradale, where 30,000 poplars and willows go out to farms each year to combat erosion and hold soil on the hills.