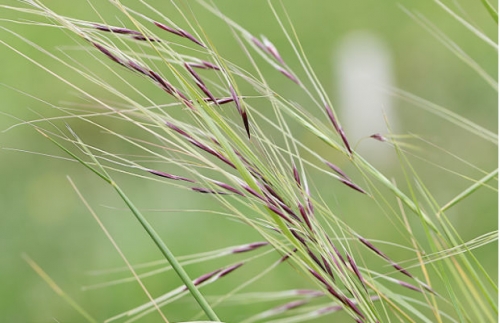 To prevent the spread of Chilean needle grass, soil, silt, and gravel can no longer be removed from the Tukituki River without authorisation from Hawke’s Bay Regional Council.

“We surveyed between the Waipawa and Tukituki confluence and the Tukituki river mouth this summer and found Chilean needle grass throughout the area. Because it’s such a harmful pest, we need help from the public to make sure we prevent it from spreading,” says Regional Council Senior Biosecurity Advisor Alice McNatty.

“Chilean needle grass is a Pest Plant in the Hawke’s Bay Regional Council Pest Management Plan and can have a severe impact on farm production and animal welfare. The seed is sharp, and spreads by attaching itself to anything that brushes past the plant. Animals, people, vehicles, machinery and equipment, soil, silt, gravel and contaminated feed can all move Chilean needle grass seed,” adds Alice.

“Consented gravel extraction will continue under strict conditions, including, cleaning machinery, notifying and recording recipients, and limiting use to activities that minimise the spread, such as concrete or foundation material.” says Ant.

Alice advises “Care should be taken when visiting the Tukituki River during the seeding time of Chilean needle grass, between late October and February. Although the Regional Council and land owners undertake control of Chilean needle grass during this time, it’s important to check clothing, footwear, vehicles, dogs and horses to ensure no seed has attached that could be taken back to your property.”

If you suspect you have Chilean needle grass on your property, please contact Alice McNatty on 06 833 8083 for advice and assistance with control.