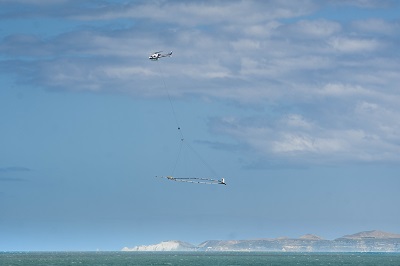 After flying 8,000 kilometres in the past month, the aerial surveying for Hawke’s Bay Regional Council’s innovative 3D mapping project has finished.

A helicopter towing the latest airborne electromagnetic survey technology called SkyTEM has flown over the region’s aquifers, scanning them down to 300 metres, further than has ever been seen before.

Regional Council Science Manager, Dr Jeff Smith, says the surveying has finished well ahead of schedule thanks to the run of fine weather.

“I’d like to thank the Hawke’s Bay community for their support during the flight period. Seeing a large helicopter flying low with a large hoop dangling from it is an unusual sight, and we appreciate people’s understanding,” he says.

The information from the survey will be processed by scientists and will give the clearest picture yet of the region’s freshwater supply.

“The fun part for the scientists now begins. The data will be used to build a detailed 3D digital picture of the aquifers horizontally and to depths never seen before. The new information will improve understanding and management of groundwater resources,” says Dr Smith.

Dr Smith says the results will be a significant step forward in understanding the region’s groundwater.

“The information we will get from the survey has significant value for the entire Hawke’s Bay community in better understanding our water resource. The results will be a big asset and are to be freely shared and available to tangata whenua, other councils and the community,” he says.

Preliminary results are expected within six months for priority areas, with the full 3D picture of the region expected to be available in two years.

The 3D aquifer mapping project is a collaboration with the Hawke’s Bay Regional Council, the Provincial Growth Fund (PGF) and GNS Science, using Danish SkyTEM technology that has been used extensively overseas.

It’s one of four freshwater projects announced during the PGF allocations to Hawke’s Bay in June last year. The others are a whole-of-region freshwater assessment, and pre-feasibility investigations on a Heretaunga flow maintenance/water storage initiative and a Tukituki water security initiative.

There is more information on the Regional Council’s website, check out www.hbrc.govt.nz, and search #3Dwater.