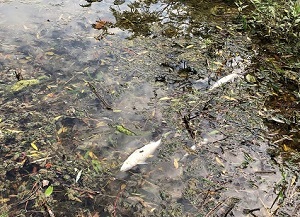 Regional Council Scientist Dan Fake says in summer months when the region’s streams and rivers get low, water temperatures can get really warm which can be quite stressful for freshwater fish.

“Many of our native freshwater fish prefer temperatures around the 20 degree mark, so when in-stream temperatures are pushing 29 degrees like they have been in the past couple of weeks, we start seeing cases of infection in fish and even fish dying,” says Dan Fake.

“Trout also don’t do well in warm temperatures, and it’s not uncommon to find sick or dead trout at this time of year.”

Hawke’s Bay Fish and Game Manager Jesse Friedlander says anglers should fish early or late in the day when temperatures are cooler and avoid fishing altogether on the hottest days to minimise stress on the fish.

“If you’re intending to release your trout; keep it in the water and avoid touching it if possible. Net the hooked trout quickly to avoid the fish becoming exhausted and never drag a fish up on to hot river rocks or sand,” says Jesse Friedlander.

Dan Fake says another consequence of low river levels is river mouth blockages, where a swell event moves beach gravels around and blocks the mouth, and there isn’t enough flow in the river to unblock it.

“In smaller systems this can result in fish deaths as the backed up water becomes stagnant, heats up and dissolved oxygen concentrations drop.”

Hawke’s Bay Regional Council Schemes Team Leader Antony Rewcastle says the Regional Council monitors river levels and mouth blockages closely, but often it’s not as simple as just going down to the river mouth with a digger to open the mouth again.

“Successful river mouth openings depend on a range of factors – river level, tide and swell conditions are just some of the factors we have to take into consideration,” says Antony Rewcastle.

“If the sea conditions aren’t right or if there isn’t enough flow in the rivers, the mouth can block up within a day or two”.

If members of the public see dead or distressed fish, or are concerned about a river mouth blockage, they can contact the Regional Council 24 hours a day on 06 835 9200