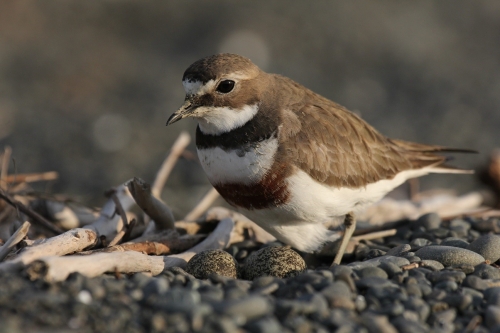 Shorebirds are thriving on Hawke’s Bay’s braided rivers a recent survey has shown.

To celebrate International Biodiversity Day on 22 May, the Regional Council is highlighting good biodiversity mahi going on round the region, reinforced by these results from the river bird survey.

Many of the birds along our rivers are at-risk and threatened, like the banded dotterel and black-billed gull, says Hawke’s Bay Regional Council Terrestrial Ecologist Keiko Hashiba.

“This is the largest river bird survey in the region in decades. It covers 262 kilometres and  shows that our rivers are strongholds for many of our threated shorebirds. This is fantastic. We’ve been seeing species decline elsewhere, so we are stoked that some Hawke’s Bay bird populations remain steady,” says Keiko.

“One of our success stories is the Banded dotterel, native to New Zealand. We counted 2,308 adult banded dotterals - about 12% of New Zealand’s population. The Tukituki, Ngaruroro, and Tūtaekurī Rivers respectively support the second, third and twelfth largest single-river populations of this species in New Zealand. In comparison, only 344 banded dotterels were counted along 211 km of braided rivers in the Wairarapa.

“It was interesting to see what parts of the rivers the birds prefer – the lower parts of the Tukituki and Ngaruroro, but all the way through on the Tūtaekurī.

“When they’re breeding, shorebirds need open and clean shingle. Woody, invasive weeds  mean the shorebirds lose breeding grounds. This links with the Regional Council’s flood protection work like gravel raking, and shows that raking may have a positive impact on shorebird populations alongside our strict ecological management regime. We only rake outside the breeding season, and before we rake, we comb the rivers and mark out any nests to protect the wildlife living there.

“It’s so important that we balance our operational and environmental roles. All our rivers have ecological management and enhancement plans to protect communities from flooding, and look after our wildlife. As a Regional Council, both these responsibilities are significant. These results show we’re achieving a pretty good mix.”

Healthy and functioning biodiversity is one of the Regional Council’s priorities is for Hawke’s Bay.