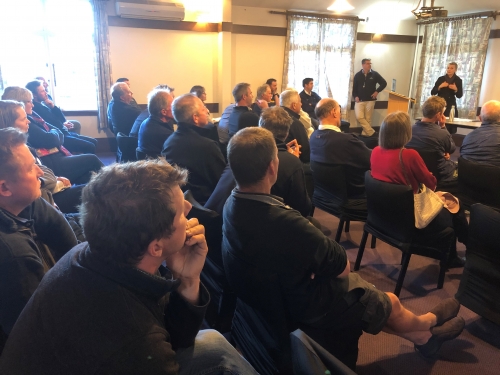 Landowners from the Upper Tukituki area met with the Regional Council to hear about plans for an injection of funding into the scheme.

About 30 ratepayers attended the meeting about recent funding from the Government’s COVID-19 Response and Recovery Fund, and general scheme work done in the past year says Group Manager Asset Management Chris Dolley.

“Of the $19.2 million we received from Government for flood protection, over $5 million is for gravel extraction in the Upper Tukituki Scheme, and it’s fantastic to get this funding,” says Mr Dolley.

“Gravel extraction has been a long-standing issue in the Upper Tukituki, and this funding allows us to deal with it immediately. We remove gravel from the Upper Tukituki Scheme to protect nearly 25,000 hectares and the 5,000 people who live there from flooding.”

“This is a co-funded project, which means the Regional Council needs to fund a roughly a third of the project. We met with the community to talk about how we fund the Regional Council’s contribution as it’s a defined scheme that provide benefits to the ratepayers through a targeted rate. This initial conversation with the community was positive with a majority supporting the work. We’ll be coming back later in the year to keep the conversation going and will be consulting formally in our 2021-2031 Long Term Plan.”

“We’re meeting with industry this week to talk through the details of how it may work and look at different uses for the gravel.”

Find out more about the scheme.