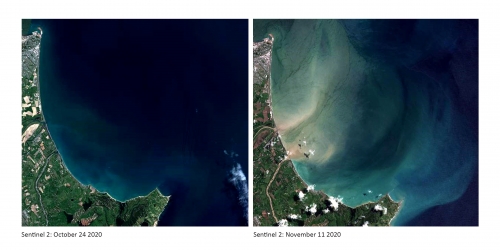 The first satellite image shows the bay between Napier Port and Cape Kidnappers in October this year, and the other image was taken after the storm struck, on Wednesday, November 11.

It shows sediment clogging up some of our major rivers, Tūtaekurī, Ngaruroro and Clive, and being discharged from these rivers and out to sea.

Council group manager of integrated catchment Iain Maxwell says that the science team are still analysing water samples to measure how much sediment was carried during the flood, but estimate that it was hundreds of thousands of tonnes.

“These satellite images reveal a telling picture of the ripple effect set in motion when we experience a major event of this kind. The storm has dislodged large volumes of potentially productive soil from our vulnerable, eroding hill sides, and this has entered our rivers, and gone as far as 20 kilometres offshore, ” he said.

Sediment impacts rivers and the coast by reducing water clarity, removing habitats for small aquatic animals, and the ability of fish to find prey. On the coast, it is problematic for algae that use sunlight for photosynthesis, and they struggle to survive, leading to a loss of habitat, he said.

“As our climate changes, and storms and drought become more intense and frequent, it is important that we restore our vulnerable land, and increase the quality of our waterways,” he said.

“The most effective way to prevent erosion on vulnerable hill slopes is to plant trees, and that’s why we are exploring how we can upscale our tree planting programme, and plant the right trees in the right places.”