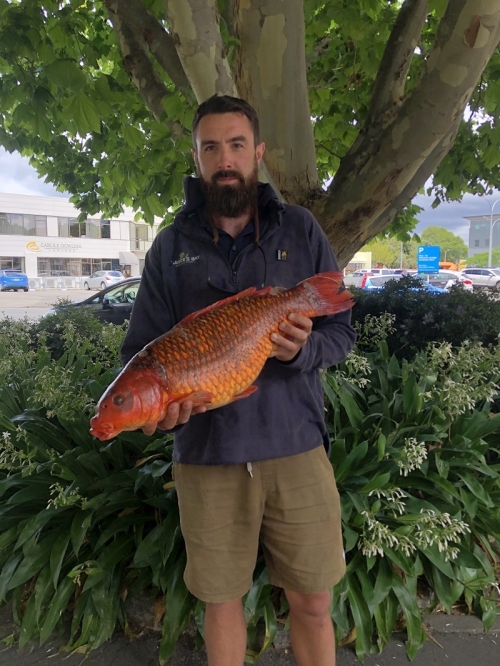 The Hawke’s Bay Regional Council is pleased that a new environmental DNA technology has helped confirm a suspected presence of the invasive koi carp in a farm pond in Hawke’s Bay.

A tip off from a farm manager, followed by a eDNA sample has resulted in a process to remove two fish that had been in the pond for some time.

Regional Council freshwater ecologist Daniel Fake says koi carp have wreaked havoc in the Waikato, Auckland and Northland where they have proliferated, and the council doesn’t want that to happen in Hawke’s Bay.

“In this instance we’re lucky that they haven’t bred in the pond, or escaped into a larger waterway, and we’re very grateful that a member of the public has alerted us to their presence,” he said.

The Regional Council used a novel new technology called eDNA sampling which picks up traces of biological material in the water and matches their DNA to known species – in this case koi carp.

Wellington based company Wilderlab provides the eDNA testing service, and the Regional Council are working closely with them to optimise the application of this new technology for council needs, and range of biodiversity and biosecurity purposes.

Department of Conservation senior community ranger Chris Wootton says it has been over 20 years since koi carp have been reported in Hawke’s Bay, but there’s a chance there’s still some lurking in isolated ponds, and he encourages the public to report any sightings.

“Koi carp resemble large goldfish, but can vary in colour with patchy gold, red, black and white colourations and have two pairs of whisker like feelers at the corner of their mouth.

The way they feed, sucking up mud and plants off the bottom can turn clear waterways muddy, and once they’re in a system they breed fast and can be difficult or impossible to remove,” says Mr Wooton.

If you see fish in our waterways that might be koi carp, please contact your local Department of Conservation or Regional Council office and report the sighting so we can remove them.