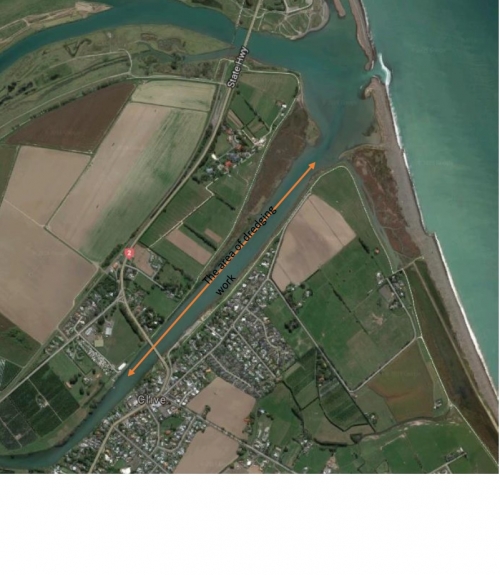 “The dredging will cover 1,200 metres, from the river mouth to above the Clive Bridge. Around 50,000 cubic metres of sediment will be dredged and disposed of out to sea.”

“The Clive River is valued by the whole community and used by lots of people. Sediment builds up over time and needs to be removed. It’s important that the river is deep enough for recreational use and can continue to protect the community from flooding,” says Ms Groves.

“We’ve been talking with tangata whenua and river users over the last few years about the dredging, and will continue engaging with them through this process.”

“Part of the dredging phase will involve environmental monitoring, looking at the effect the sediment is having when moved to the sea. Studies we’ve already done show that the environmental impact is minimal, but we want to make sure of this, so we will be checking as we go.”

“The dredging is made more difficult by a number of factors including cost, availability of the only dredge in New Zealand, the spawning season for wildlife in the river including whitebait, and recreational use.”

The dredging of the river is part of the Regional Council’s management of rivers to protect the community from flooding and to manage the wildlife and biodiversity habitat that the river supports.

ENDS
Editorial Note:
Until 1969 the lower Clive River was part of the Ngaruroro River. In 1969 the Ngaruroro River was diverted entirely down a new channel, providing relief from frequent flooding in Clive and Hastings. This resulted in a drastic change of flow pattern in the lower Clive River. A consequence of this is a build-up of silt over the river-bed which was previously gravel. Lower and slower river flows have meant that sediment is no longer transported to the coast.