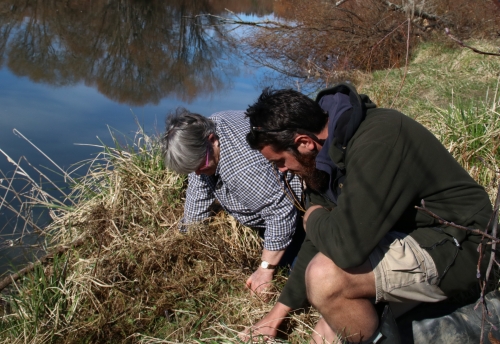 It's coming up to the whitebait season on 15 August and we're hoping it's a good one as some of our staff saw schools of whitebait swimming up the rivers as early as June.

A recently discovered inanga spawning site in Te Awanga was a place for investigating as Dan Fake from the Regional Council, members of the Maraetōtara Tree Trust (MTT), and Hans Rook (ex DOC) met to have a look at a recently discovered site, and inspect the eggs. The Regional Council and MTT have worked together with the farming community on the Maraetōtara River since 2002.

Inanga are the most common species of the whitebait whānau, and around autumn they make their way down to where salt water and freshwater meet and spawn in the flooded vegetation – they quite literally putting all their eggs in one small basket.

It's important to protect the areas where inanga spawn so there are healthy adult fish for seasons to come, and over the years the Regional Council and Department of Conservation have been putting in the mahi to improve the whitebait supply. They have so far identified and fenced off over 3km of spawning sites.