Find out about our climate and see our summer climate briefing videos online.

Find out what the weather is doing and how the region is coping through the hotter months with our videos and presentations below.

Hawke’s Bay has a usually temperate climate – neither too cold, nor too wet, although we enjoy some hot days in summer.

However we are vulnerable to extreme weather conditions.  Cyclone Bola in 1988 and a coastal storm in April 2011 caused a lot of damage and a long term cost to landowners.  And although it seems unbelievable on a summer’s day at the beach, we get frosts and it can snow here and in the Winter of 2015 it did so as far down as the coast.

In general terms, on the East Coast, we see a relationship between our regional climate and the large circulation patterns in our hemisphere, particularly the ENSO (El Nino Southern Oscillation) between the east and west Pacific which determines El Nino and La Nina phases, and the IPO (Inter-Decadal Pacific Oscillation) which extends more broadly over the Pacific.

Climate records from the weather station in Napier’s Nelson Park since 1940 show small but significant changes over time. The number of hot days (temperatures over 25 deg C), the duration of warm spells and the day-night (diurnal) temperature range appear to have increased.  There is a decreasing number of cold days (temperatures below 10 deg C).

Severe weather, especially cyclones from the tropics, can then bring significant rainfall resulting in landslips, high river and stream flows and localised flooding.  Storms can also bring high seas, resulting in sea water inundation along the coast, property damage and erosion of beaches.

It’s not uncommon for strong wind warnings to be issued for Hawke’s Bay, particularly across the exposed plains.  Wind erosion of exposed paddocks, damage to trees, power lines and buildings and toppled vehicles can be the result.

Climate Change office of the Ministry of the Environment

Ministry of Agriculture and Forestry 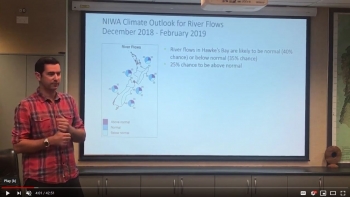 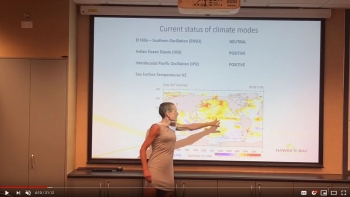