The Clive River is part of the Heretaunga Plains Flood Control Scheme and flows out of the Karamu River and Raupare Stream, before joining up with the Ngaruroro River and meeting the sea.

The river has cultural and recreational values for tangata whenua and locals, from mahinga kai to water sports. 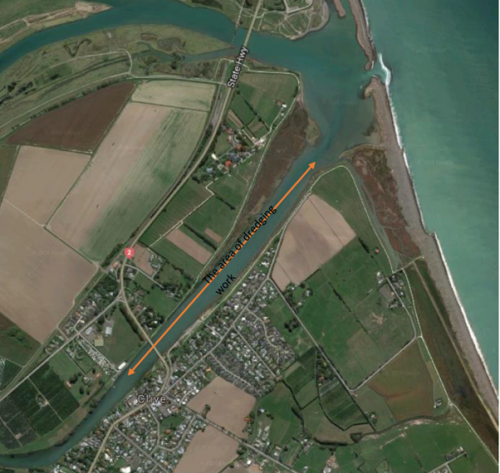 The river is scheduled to be dredged every ten years depending on the silt build up to remove sediment in the lower reaches of the river, increase water depth and maintain channel capacity, while enhancing the recreational use of the Clive River.

The river is next scheduled to be dredged in 2022, though this is dependent on the resource consent. It will take around three months to dredge 1,200m metres of the lower Clive.

Part of the dredging will be environmental monitoring during and after the dredging, looking at the effect the sediment has on the environment when it’s moved out to the sea.

The dredging is constrained by a number of factors, including cost, availability of the dredge, spawning season for wildlife in the river including whitebait, and recreational use.

Originally the lower Clive River was part of the Ngaruroro River until 1969 when the Ngaruroro was diverted entirely down the overflow channel, providing relief from frequent flooding in Clive and Hastings. This resulted in a drastic change of flow regime of the lower Clive River. A consequence of this was a build-up of silt over the river-bed which had previously been gravel, as the lower river velocities meant that the sediment was no longer transported to the coast.

A 1993 survey indicated that since the diversion of the Ngaruroro River, 66,000 cubic meters of silt was deposited over a length of 2,000 metres of the lower Clive River, reducing the depth by an average of 0.35m.

Dredging was first carried out in 1997 after obtaining a resource consent and again in 2009, with another resource consent and renewed community liaison. The dredging volume in 2009 was less than the 1997 volume and did not extend as far upstream as the first operation as the siltation upstream was found to be less significant.