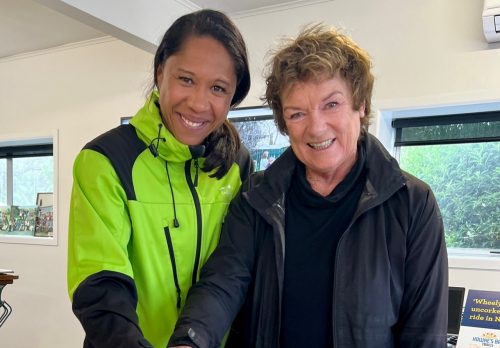 Hawke’s Bay Trails is celebrating its 10th anniversary since it opened as one of 23 iconic ‘Great Rides’ in New Zealand. The network of 200 kilometres of mostly off-road scenic trails through the region, passes through vineyards, and beside winding rivers, orchards, mountains and the Pacific coastline.

To mark this significant milestone, today in Taradale, trail partners, and council staff jumped on their bikes to ride the Puketapu Loop, as it was done to open the trails in 2012.

Regional Council Chair Hinewai Ormsby says it was an enjoyable ride along the stop banks, despite the weathers attempt to dampen the mood.

“As a region, we’re very fortunate to have the availability of the cycle tracks that allow us to experience water (wai), wineries (waina) and landscapes (whenua) with our whanau and manuhiri (visitors).”

In a speech Councillor Ormsby acknowledged former Mayor Barbara Arnott’s work in the trail’s initial development. “We are really grateful to Barbara for her warriorship as she was instrumental in the early days.”

The trails are the most popular of all 23 Great Rides in the country, with the majority of the trails being used by locals, followed by visitors to the region, according to research from New Zealand Cycle Trail and the Ministry of Business, Innovation and Employment. People enjoy cycling the trails as well as soaking up the hospitality on offer, stopping at the range of cafes, country pubs and wineries.

Hawke’s Bay Regional Council Cycle Network Coordinator Vicki Butterworth says the trails have experienced exceptional growth and development over the years. “We know that the Marine Parade trail has seen a 55% increase in trips since 2014.”

Before the trails opened, there were no dedicated cycle tour or bike hire operators in Hawke’s Bay. Now, there are 12 bike hire and tour companies employing local people across the region, says Ms Butterworth.

“The trails contribute economically to our region, and they’re also leading the way in sustainable tourism.
Where trails have been developed, we’ve seen wetlands restored, which sequester carbon, and attract wetland and coastal birdlife and enhance the biodiversity of the area.

The trails have sparked collaboration of community groups - and the development of tourist attractions like the magnificent Ātea a Rangi Star Compass in Waitangi Regional Park and the Cape Coast Trail, filled with art sculptures and early heritage stories, all supporting and enriching our communities”, she says.