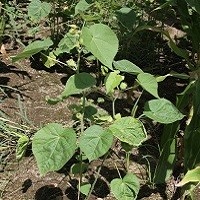 Velvetleaf has been discovered in Hawke’s Bay as well as a number of other sites around New Zealand. The Ministry of Primary Industries is operating a national response to control this outbreak.

The weed has been discovered in two places in Hawke’s Bay among fodder beet crops. Farmers are asked to urgently help locate outbreaks of this pest plant as the plant is seeding now and its seed is viable for decades.

Velvetleaf (Abutilon theophrasti) affects arable crops by competing for nutrients, space and water and killing surrounding plants. It is an unwanted organism in New Zealand. It is likely that the weed came into the country in fodder beet seed.

The plant should be easy to spot as it stands well above a beet crop, and has distinctive large, velvety, heart-shaped leaves.

Farmers are asked not to pull the plants out, but instead take a photo, mark the location so it is easy to find again and contact MPI immediately on 0800 80 9966. An MPI investigator will make arrangements to collect the plant and inspect the rest of the crop.