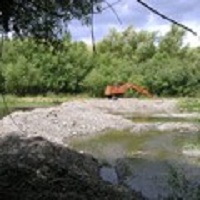 There is a population explosion of wasps along Hawke’s Bay riverbanks and Hawke’s Bay Regional Council is warning people to take care along river berm areas.

“If there’s a large amount of wasps around, our advice is to leave the area, and certainly avoid going into the undergrowth where you may disturb a wasp nest,” says Vince Byrne, HBRC’s rivers manager.

It is not known why wasps have increased to such large numbers in these areas but there have been reports of similar problems in other parts of the country.

Wasp stings are painful and can result in severe allergy reactions which may require immediate medical attention.

The warning also extends to dogs.

Mike Lintott of Carlyle Veterinary Clinic says he was not aware of any recent, local problems with dogs and wasps, but he knows that dogs have died when they have disturbed a nest and suffered multiple stings.

“If there are a number of wasps around, leave and walk the dog somewhere else.  It’s important to keep the dog under control so it doesn’t get into undergrowth where the wasp nest may be,” he advises.

He says that even a few wasps can be a problem for dogs. Dogs can snap at wasps and be stung around the muzzle or in their throat, which can result in throat swelling and breathing difficulties.

Hawke’s Bay Regional Council does not eradicate wasps and these are not included in the regional pest management strategy.