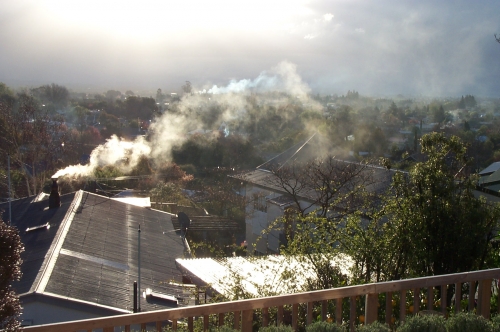 Low wind conditions are resulting in Hastings having a run of high air pollution days, so far mostly at weekends when people are at home and keeping warm.

“There’s not much we can do about the weather, but the amount of smoke we produce is something we can change and need to change for us to achieve health standards regardless of what the weather is doing,” says Hawke’s Bay Regional Council’s air quality scientist, Dr Kathleen Kozyniak.

So far this year, there have been 7 exceedances of the National Air Quality Standard – set at 50 micrograms of PM10 per cubic metre. This is twice as many as HBRC had hoped for.

The first exceedance this winter was in Hastings on Sunday 5 June.  The pollutants are measured over a 24 hour period.  On that day the average level of PM10 measured at the St John’s air quality monitor site was 55 micrograms per cubic metre (μg/m3).

There were exceedances on Tuesday 14 (55 μg/m3) and Wednesday 15 June (61 μg/m3), and then again on Saturday 18 June (55 μg/m3).  There have since been three exceedances in Hastings in July, two on the weekend just gone, but none in Napier.

The air pollution problem in Hastings and Napier is caused by smoky air being trapped close to the ground when inversion layers form in the atmosphere over the plains during cold, low wind conditions. The small particles in smoke – or PM10 - is a health issue inside and outside homes, especially for people with respiratory problems.

HBRC’s Heat Smart manager Mark Heaney says that the council’s programme of providing grants and loans to help people upgrade to modern wood burners has been popular, and 8700 wood burners have been replaced across Hastings and Napier since the programme began in 2009. Many other homes are likely to have upgraded as well, without the use of HBRC funding.

“Pre-2005 wood burners generate noticeably more smoke from chimneys than modern appliances. People should go outside on a cold, still night and check how much smoke is coming from their flues and surrounding their home and neighbourhood,” he says.

“You can have a fire that produces low levels of smoke with some good management. Lots of smoke means there’s a problem with the wood burner, the material being burnt or the fire-lighting technique," says Mr Heaney.

“Ask yourself the question: is your money going up in smoke? Any smoke you see is unburnt fuel.  While you can expect to see some smoke on start up (until the fire reaches a good temperature), after 20mins from lighting, the more smoke, the more money you’re wasting and the worse the impact on our health.”

Since 2005 wood burners have been manufactured to burn more efficiently.

What is the National Environmental Standard – Air Quality?

The National Environmental Standard (NES) for air quality sets an acceptable limit for fine smoke particles in the air (measured as PM10) of 50 micrograms of PM10 per cubic metre averaged over 24 hours. From September 2016 the NES will require this limit to be exceeded only once a year in Napier and no more than three occasions in Hastings, before reducing to only one exceedance a year from September 2020.